Google Chat’s been replacing the aging Google Hangouts, even if not everyone’s a fan. But for teams who really give it a chance, it can work amazingly, with support for abilities like creating and assigning tasks à la Asana or Basecamp. While you can add details to a task, sometimes you might forget some context or leave behind a couple of notes that might’ve been important. This is why Google is now adding a handy shortcut called View in Chat. 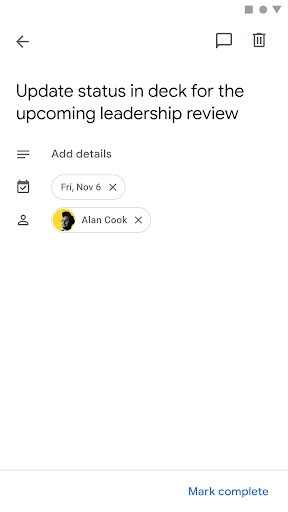 The “View in Chat” button is visible in the top right, next to the trash can.

By tapping this button from within a task, you’re able to go back to the Chat message where the task was first created. This way, you can surface context or details on that task, or re-engage your team members with updates and questions on it. It’s a pretty simple shortcut, but one that can also greatly improve the workflow of your Google Workspace and also potentially save a lot of time.

The official Google blog post announcing this clarifies that neither admins nor users need to do anything on their end for the feature to show up — the shortcut will be available to all Google Workspace users by default as well as G Suite Basic and Business users, and it will begin rolling out starting today. It does mention that this is an “extended” rollout, which means that while you might see it within the next couple weeks, it could also potentially take longer than that.