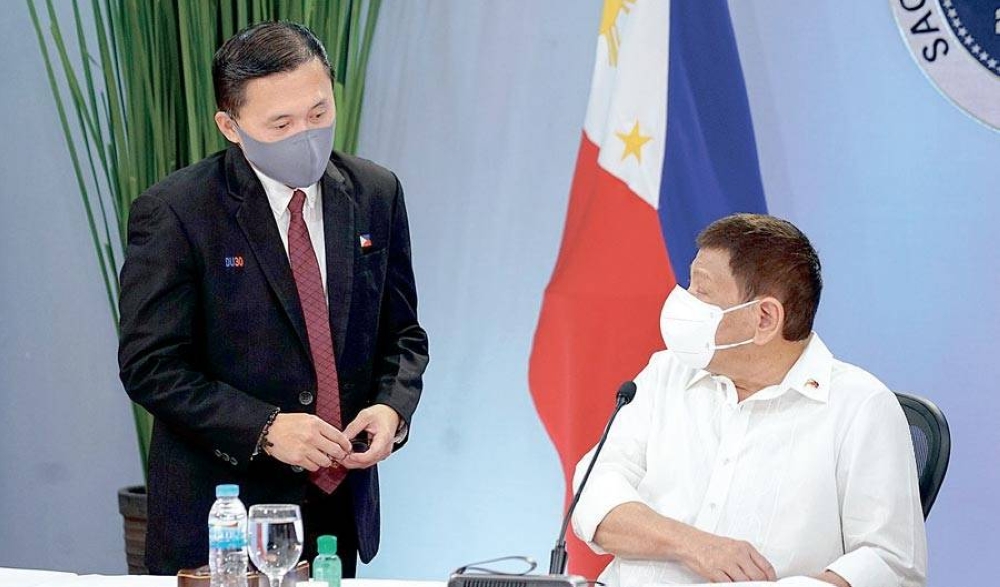 BFF President Rodrigo Duterte discusses matters with Sen. Christopher Lawrence ‘Bong’ Go during a meeting with the core members of the Inter-Agency Task Force for the Management of Emerging Infectious Diseases at the Malacañang Golf (Malago) Clubhouse in Malacañang Park, Manila on Aug. 26, 2021. Go expressed his support for the President and his children ‘till death’ amid a reported rift with eldest daughter, Davao City Mayor Sara Duterte-Carpio, over who should seek the presidency in 2022. MALACAÑANG PHOTO

SEN. Christopher Lawrence “Bong” Go said Thursday he has no quarrel with Davao City Mayor Sara Duterte-Carpio, and that his love for President Rodrigo Duterte and his children “is the same.”

Speculations about the strain in the relationship between Go and Duterte-Carpio began to surface after the mayor challenged Go and her father to “own up publicly” their decision to team up for the presidential election next year, and bluntly told the Partido Demokratiko Pilipino-Lakas ng Bayan (PDP-Laban) not to involve her in the party’s intramurals.

In a statement Friday, Go denied there are issues between him and Duterte-Carpio. “Kung anong pagmamahal ko sa tatay ganun din ang pagmamahal ko sa mga anak. Alam ni Pangulong Duterte ‘yan (My love for the father and for his children is the same. President Duterte knows that),” he said.

Go said he promised Duterte he would stay by the President’s side till death. He added that Duterte instructed him to look after his children when he is gone.

“Unang-una, nais kong klaruhin na silang mag-ama ang nag-uusap tungkol sa pulitika. Kung ano ang usapan nilang magtatay, nasa sa kanila na po iyon. Pero tulad ng sinabi ko noon, anuman ang magiging desisyon nila, susuportahan ko (First of all, I want to make it clear that when they talk about politics, that is their private thoughts. However, as I have said before, whatever their decision is, I will support),” Go said.

The senator maintained he is not interested in running for president despite the endorsement from his partymates.

The faction in the PDP-Laban allied with the President has endorsed Go as the party’s standard bearer and Duterte as his running mate.

Go said that when it comes to selecting and supporting the country’s next leaders, he hopes for the “continuity” of the positive change started by the Duterte administration.

He said the country’s next president must have the same political will as Duterte in order to continue the reforms he has implemented.

2 hours ago
Share this ArticleLike this article? Email it to a friend!
Email sent!