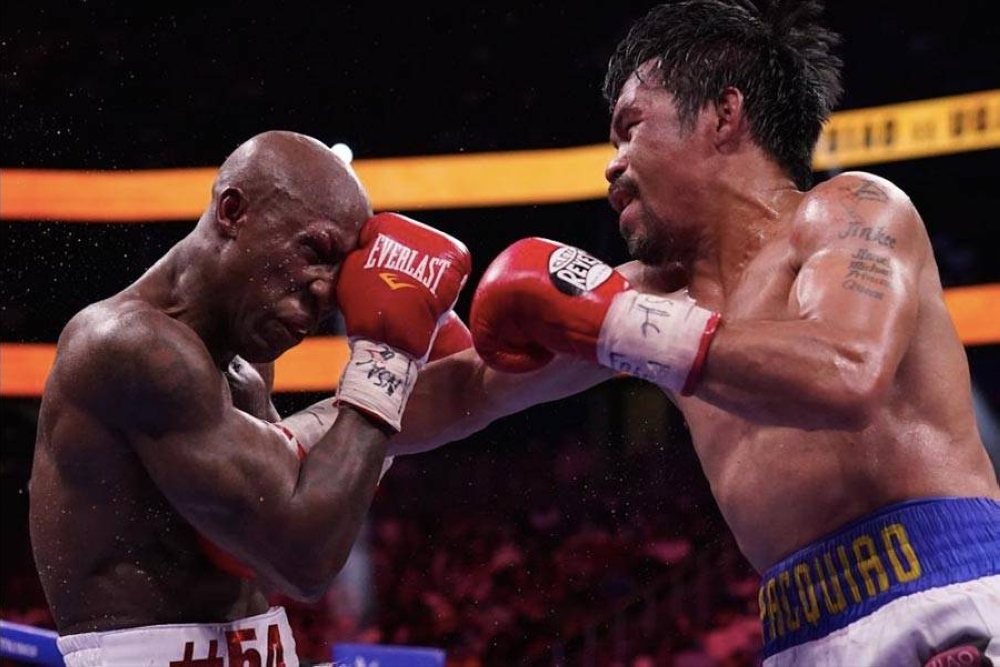 LAS VEGAS: Boxing legend and Sen. Emmanuel “Manny” Pacquiao sounded like a fighter on his way out and a politician on his way up.

He might have concealed his battered face behind big sunglasses, but Pacquiao didn’t hide behind excuses or denial after a discouraging unanimous-decision loss to Yordenis Ugás on Saturday (Sunday in Manila).

Yes, Pacquiao disclosed that his legs cramped throughout the fight on the Vegas Strip, depriving him of the mobility that has always made his power so dangerous.

The eight-division world champion still acknowledged the larger fact obvious even to most of his devoted fans around the world: He deserved his loss to Ugás, a talented opponent who probably wouldn’t have been much trouble for prime Pacman.

And that might be a good reason to walk away.

“This sport is my passion,” Pacquiao said. “That’s why I’m still here fighting at the age of 42. I’m enjoying it, but sometimes you have to think about the response of your body. My mind, my heart, it’s 100 percent. But my legs were cramping.”

In the moments after he returned from a two-year ring absence with the loss to the rangy, resilient Ugás, Pacquiao repeatedly hinted he is planning to retire from boxing.

He is still alongside Santos Saul “Canelo” Alvarez as the two biggest active stars in the sport, yet Pacquiao (67-8-2) has never spoken so frankly about leaving behind 26 years in the pro fight game.

“I’ve done a lot for boxing, and boxing has done a lot for me,” Pacquiao said. “I look forward to spending a lot of time thinking about my future in boxing.”

Pacquiao’s post-fight comments included a sprinkling of such catchy, pre-written phrases – sort of like a stump speech by a politician.

Indeed, the Filipino senator’s next fight is probably in the political ring: He is widely expected to enter the presidential race in the Philippines next month ahead of the May 2022 election.

“In my heart, I want to continue to fight,” Pacquiao said. “But the thing is, I also have to consider my body. I’ve put it through a lot of things. Especially back in my country, there’s a lot of things I need to accomplish to help people. I want to be an inspiration to the Philippine people inside and outside the ring.”

Countless athletes have struggled mightily to find worthwhile ways to fill their time after retirement. That wouldn’t be a problem for Pacquiao: His chaotic life won’t get less busy, but it could be a bit more focused with only one career to consider.

If Pacquiao retires, he leaves boxing as one of the greats of his generation. Along with his stunning array of championship belts and his groundbreaking mobility across the sport’s weight classes, Pacquiao will be remembered for his utter fearlessness in taking on countless larger foes without blinking.

Freddie Roach, Pacquiao’s devoted trainer for most of the past two decades, acknowledged being “a little worried” about the champ.

“He’s boxed for a long time, and he’s the best guy I’ve ever had,” Roach said. “The best guy, the best fighter. I hate to see the day when he retires, but this could be it. We’ll see what Manny decides.”

Another scenario seems equally plausible at this point: Pacquiao doesn’t win the presidency in nine months – he is behind several candidates in early polling – and he subsequently gets a highly lucrative opportunity to return to the ring late next year, when he will be nearly 44.

Given Pacquiao’s competitive nature and his relatively expensive lifestyle, his self-awareness could be overcome by the rewards of the fight game.

But in the moments after this cramping, frustrated great lost for the first time in four years, Pacquiao was thinking deeply about both his current state and future priorities.

“This situation might finish my career in boxing,” Pacquiao said. “But this is my statement to all the boxing fans all over the world: The most important thing is how we can help each other, especially in this pandemic.”

1 hour ago
Share this ArticleLike this article? Email it to a friend!
Email sent!