SpaceX and NASA will have to wait until Sunday for the launch of the CRS-23 (Commercial Resupply Services 23) mission to the International Space Station on a Falcon 9 rocket from the Kennedy Space Center.

CRS-23 marks the third SpaceX CRS mission under the CRS2 contract, and the third time a Cargo Dragon 2 spacecraft will be used for a CRS mission.

A third Cargo Dragon 2 is under construction.

The hiatus since June is largely due to SpaceX switching their Starlink satellites to V1.5, including new features and improvements such as laser interlinks. Additionally, many customer payloads that would be launched on non-Starlink missions are currently not ready.

Falcon 9 and Dragon rolled out horizontally at LC-39A on August 24 and were raised vertical on the pad a few hours later. A static fire was completed on August 25 ahead of the launch.

The Crew Access Arm was then extended toward Dragon C208-2’s side hatch to allow easy access to the capsule for loading time-sensitive science experiments and perishable food items in the final hours leading to launch.

At T-38 minutes in the countdown, the SpaceX Launch Director will verify that Falcon 9 is “go” for propellant loading. RP-1 kerosene and densified liquid oxygen will begin flowing into the first stage while RP-1 kerosene flows into the second stage starting at T-35 minutes.

Loaded with science and supplies for the folks living on ISS, Cargo Dragon is ready to deliver!

One experiment I think is rad is one by the @girlscouts to see how ants might build tunnels in space.
An ant farm. In space! 🚀🐜

At T-45 seconds, the SpaceX Launch Director will verify that CRS-23 is “go” for launch. Falcon 9 will ignite all nine first-stage Merlin engines at T-3 seconds with Falcon 9 lifting off at T0.

The launch window is instantaneous. Therefore, there is no opportunity to hold should an issue arise.

Approximately 1 minute 15 seconds into the flight, Falcon 9 and Dragon will experience maximum aerodynamic pressure (Max Q), when the aerodynamic loads on the vehicle are at their greatest during ascent. 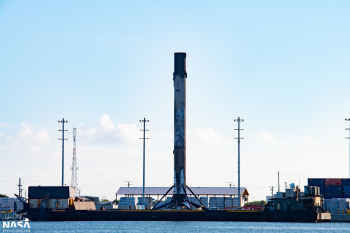 Falcon 9 booster B1061-4 stands tall on Just Read The Instructions after launching the SXM-8 mission — via Julia Bergeron for NSF.

Following stage separation, first stage B1061-4 will begin recovery operations by performing a partial boostback burn to help reduce the stress on itself during reentry. This has the added effect of allowing the booster to land closer to the launch site, permitting faster recovery.

After completing the boostback and entry burns, B1061-4 will aim to land on SpaceX’s new autonomous spaceport drone ship (ASDS) A Shortfall of Gravitas at T+7 minutes 38 seconds.

The landing will be the first for the new drone ship, which arrived at the Cape on July 15.

While enough propellant will remain for a partial boostback burn, there will not be enough margin for a Return To Launch Site landing.

As soon as B1061-4 touches down on A Shortfall of Gravitas, it will receive the designation B1061-5.

A Shortfall of Gravitas sports new design features and improvements from ASDS vessels Of Course I Still Love You and Just Read The Instructions, such as being fully automated.

While the first stage is performing landing operations, the second stage will continue on to orbit. Following orbit insertion at T+8 minutes 34 seconds, Dragon will separate at T+11 minutes 45 seconds to continue its journey to the ISS.

Over the following 31.5 hours in orbit, Dragon will slowly phase its way up to the ISS. Once near the station, Dragon will perform several required approach maneuvers, culminating with docking at the IDA-2 forward-facing docking port on the Harmony module on Monday, August 29, 2021, at 11:00 EDT (15:00 UTC).

Once docked, Dragon C208-2 will stay at the station for approximately one month, with splashdown currently expected in late September or early October. Upon its return, the capsule will bring back several experiments for further testing, analysis, and use on Earth.

What is Dragon carrying?

In addition to crew supplies and station equipment, CRS-23 is carrying a multitude of engineering and scientific experiments to the ISS.

Some of the experiments include:

The GITAI S1 Robotic Arm Tech Demo will test GITAI Japan Inc.’s microgravity robot by placing the arm inside the newly added Bishop Airlock, which was carried to the station by Dragon C208-2 during the CRS-21 mission last year. Once inside the airlock, the arm will perform numerous tests to demonstrate its versatility and dexterity.

The Ultra-Compact Spectral Imager is expected to validate the calibration of an ultra-compact spectral imager in space to obtain hyperspectral imaging of Earth in the visible spectrum.

The ExoLab-9 experiment will study how the stress of spaceflight affects the symbiotic relationship of red clover and nitrogen-fixing Rhizobia bacteria while the Faraday Research Facility will assist several experiments that utilize the ISS EXPRESS Racks and will demonstrate ways of providing an autonomous research facility in low Earth orbit.

#Research heading to the @Space_Station has potential for #telemedicine on Earth, where it could help patients who lack easy access to medical clinics, and for future astronauts on long-term space exploration missions.
Check out all the details here: https://t.co/Z9BEfLY7qY pic.twitter.com/stpAOPRHNx

The Remote Controlled Nanochannel Implant for Tunable Drug Delivery project will test a drug delivery implant that will remotely release specific amounts of medication into the body. This project, which cannot be tested on the ground, will help develop a nanochannel implant for drug delivery that could greatly improve medical treatment on Earth.

The Student Spaceflights Experiments Program – Mission 15 features six separate experiments developed by students in the United States. Four of the experiments will evaluate germination techniques in space, one will focus on tardigrade adaptation to spaceflight, and the final one on aluminum corrosion in space.

Meanwhile, the Making Space for Girls challenge provides young American women the opportunity to send their research to the ISS.

Lastly, the Retinal Diagnostics experiment will test whether a small instrument can capture images of an astronaut’s retinas. Images from this instrument will help document the progression of vision problems, particularly Space-Associated Neuro-Ocular Syndrome (SANS), while in space.

55 mins ago
Share this ArticleLike this article? Email it to a friend!
Email sent!