Philippine authorities on Thursday advised fishermen to avoid waters off Sta. Ana, Cagayan, and off Tandag, Surigao Del Sur, on the afternoons of October 22 to 28.

According to the Bureau of Fisheries and Aquatic Resources (BFAR), offshore waters 730 kms from Sta. Ana, Cagayan and 383 kms from Tandag, Surigao Del Sur, are among the identified drop zones in South Korea’s space rocket launch.

“As per PhilSA (Philippine Space Agency) report, the launch may cause the danger of falling rocket debris for ships, aircrafts, and other vehicles that will pass through the identified drop zones,” BFAR said in an advisory.

“The rocket debris may also wash offshore towards the Eastern seaboard in the future.”

According to information received by PhilSA, the Korea Aerospace Research Institute will launch its space rocket “Nuri” on October 21, 2021 with the possibility of a delay between October 22 to 28 subject to weather and wind conditions.

“Hence, the DA-BFAR, based on the recommendation of the PhilSA, advises all fishing vessels to stay away from the affected area and avoid fishing and other offshore activities from 2:00 – 6:30 PM,” BFAR said. 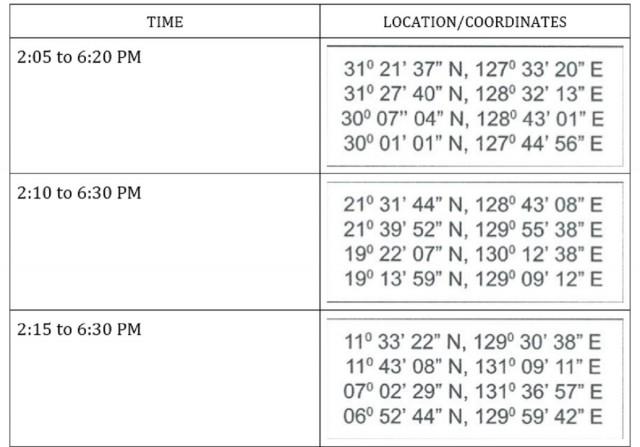 PhilSA, however, said the risk of rocket debris falling over the Philippine landmass is minimal.

“Nevertheless, coastal residents near the affected areas are advised to be on the lookout for floating debris that may wash ashore days, weeks, or even months after the launch,” BFAR said. —KBK, GMA News

CBCP exec lauds gov’t for repatriation of over 800K OFWs

Lockdown threats in NCR ‘much lower’ amid Omicron: OCTA

15 mins ago
Share this ArticleLike this article? Email it to a friend!
Email sent!